PURCHASE, N.Y., Sept. 5, 2019 /PRNewswire/ -- Gatorade®, the world's number one sports drink, is releasing an original, long-form documentary series entitled "Cantera 5v5." The series, produced in partnership with All Rise Films and the PepsiCo Content Studio, will provide an intimate look at the stories of five aspiring athletes competing in the 2019 Global Gatorade 5v5 Soccer Tournament and their road to the global finals. "Cantera 5v5" will debut during the Tribeca TV Festival in New York City on September 14. 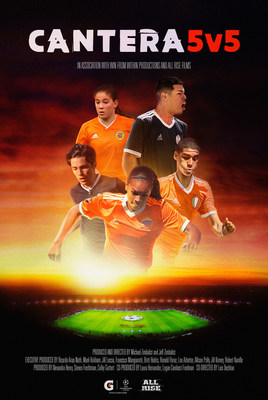 The five-episode series, directed by filmmakers Jeff and Michael Zimbalist, gives the audience an exclusive insight into the Global Gatorade 5v5 Soccer Tournament and the lives of five aspiring athletes from around the world. With behind-the-scenes access, the content brings viewers high-octane, exciting portraits of sacrifice and passion, exploring what it takes to be a champion – both on and off the pitch. The episodes feature the stories of five athletes: Yahya Sabbar (Italy), Rodrigo Alpizar (Mexico), Gisela Robledo Gil (Colombia), Daniel Zabala (Argentina), and Flavia Alonso De Carvalho (Brazil).

The Global Gatorade 5v5 Soccer Tournament is an annual five-a-side soccer tournament for 14 to 16-year-olds which runs across Latin America, North America, Asia and Europe. Since the Gatorade® 5v5 Soccer Tournament started four years ago, more than 18,900 teams have competed in the tournament, which continues to fuel a new generation of soccer players and provides them with the opportunity to compete for their country on a global stage.

"The stories in 'Cantera 5v5' powerfully capture the impact of the Gatorade 5v5 Soccer Tournament in fueling the next generation of athletes. Through the partnership with All Rise Films and the PepsiCo Content Studio, these five featured athletes have their stories told as a representation of the tens of thousands of the athletes who have competed in the tournament," said Mark Kirkham, VP & GM, Sports Nutrition & Juice, Global Beverages, PepsiCo.

"The Gatorade 5v5 Soccer Tournament is an amazing global program filled with poignant stories from on and off the pitch. It was inspiring to see the dedication and drive of the competitors and we're honored to bring their stories and passion to the screen," said Jeff and Michael Zimbalist.

The PepsiCo Content Studio serves as a global creative, production and innovation resource for all branded content, including brand-inspired long and short-form films and series, music and social content. The Studio's work has been recognized at over 15 film festivals including Sundance and Tribeca and has appeared in two Super Bowls as well as numerous brand campaigns. The Studio's work on the feature film, Uncle Drew, was recognized with a 2019 Cannes Lion and was a finalist for the 2019 Tribeca X Award, representing the best in branded entertainment.

About Gatorade
The Gatorade Company, a division of PepsiCo, provides sports performance innovations designed to meet the needs of athletes at all competitive levels and across a broad range of sports. Backed by more than a 50 year history of studying the best athletes in the world and grounded in years of hydration and sports nutrition research at the Gatorade Sports Science Institute, Gatorade provides scientifically formulated products to meet the sports fueling needs of athletes in all phases of athletic activity. For more information and a full list of products, please visit www.gatorade.com.

Guiding PepsiCo is our vision to Be the Global Leader in Convenient Foods and Beverages by Winning with Purpose. "Winning with Purpose" reflects our ambition to win sustainably in the marketplace and embed purpose into all aspects of the business. For more information, visit www.pepsico.com

Past Tribeca TV Festival programming included a celebration of Law & Order: SVU's 20th anniversary, a surprise world premiere screening of Will & Grace's reboot; a look back at 10 seasons of The Real Housewives of New York City and a special celebration of the 200th episode of Shark Tank, plus new season premieres from Anthony Bourdain: Parts Unknown, Ray Donovan and Madam Secretary. It has hosted exclusive post-screening conversations and Tribeca Talks with Tracey Ullman and Meryl Streep (Tracey Ullman's Show), Oprah Winfrey (Released), Trevor Noah and the writers of The Daily Show; Bryan Cranston, Rosario Dawson, Laverne Cox, among others.

Tribeca has a history of introducing audiences to new series that went on to garner both critical acclaim and commercial success. Past TV programming at the Tribeca Film Festival included the series world premieres of Chernobyl, The Hot Zone, The Handmaid's Tale, Genius, The Night Of, and more; plus special one-night-only conversations celebrating TV milestones such as The Simpsons' 30th anniversary, the 25th anniversary of the finale of In Living Color, a farewell to Mr. Robot and more.